Alys, Always is a new play by Lucinda Coxon based on the book by Harriet Lane. When Frances (with an E!) witnesses a fatal car accident she finds herself drawn into the life of the Kyte family. Frances was the last person to speak to Alys Kyte before she died – her family see the opportunity to cling on to the final moments of Alys’ life, Frances sees it as an opportunity to get further in her own. You see, Frances works for the books pages of a Sunday newspaper and Alys’ husband, Laurence, is one of the hottest writers in town. What was a horrific tragedy to most, becomes a career defining moment for Frances.

This show is billed as a psychological thriller but, I am not really sure it lives up to that title. Maybe I expect too much, but I like my psychological thrillers to have twists and turns – the only twists and turns this show had were the ones which caused the crash at the beginning. That being said, the storyline, albeit simple, was easy to get along with. The character development of Frances, through the slow progression of subtle changes throughout the play, was ultimately intriguing.

The clever use of space in the staging of this play helped to draw in the audience and I personally found the use of a pit to carry out scene changes fascinating, although it did mean that sometimes I spent more time looking into the pit than watching the actual show!

I went to see this show in the final week of it’s almost 10 week run (5 weeks post previews) and yet it did not feel like the cast had settled into their roles. Lines were fluffed on quite a few occasions and there were many times when some of the cast just did not seem particularly sure of themselves. I could not get on with Leah Gayer’s portrayal of Polly which felt particularly forced and, despite being one of the big names in the show, Joanne Froggatt’s performance left me wanting so much more. On the other hand, Sylvestra La Touzel provided an utterly convincing depiction of Mary, the books editor, as she channelled her inner Miranda Priestly from the Devil Wears Prada.

This show has all the components of a good piece of theatre but one which is just “nice” rather than “wow”.

Alys, Always is playing at the Bridge Theatre until Saturday 30th March 2019

View all posts by fionastheatretour

Hello fellow theatre lovers (and the soon to be converted!), welcome to my blog.

Come on in and follow me on my tour of all things theatre! 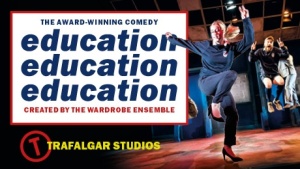